The BLS released its report today on February unemployment in 372 metro areas in the US. The data for Colorado is not different from the statewide report already released by the Colorado Department of Labor and Employment. The chart with local unemployment rates is here.

Nevertheless, the report does provide some comparisons with other metro areas in the nation. The map on the last page of the report shows that among the metro areas in Colorado, Pueblo, Colorado Springs, Grand Junction and Greeley have unemployment rates (not seasonally adjusted) above the national rate of 8.7 percent (not seasonally adjusted). During February 2012, Denver metro, Boulder and the Ft. Collins-Loveland area had unemployment rates below the national rate.

These results are identical with January's findings for each of the state's metro areas. 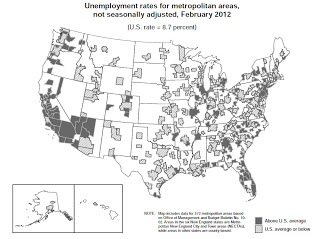 Unemployment rates were lower in February than a year earlier in 344 of the 372 metropolitan areas, higher in 19 areas, and unchanged in 9 areas, the U.S. Bureau of Labor Statistics reported today. Thirteen areas recorded jobless rates of at least 15.0 percent, while 12 areas registered rates of less than 5.0 percent. Two hundred sixty-seven metropolitan areas reported over-the-year increases in nonfarm payroll employment, 98 reported decreases, and 7 had no change. The national unemployment rate in February was 8.7 percent, not seasonally adjusted, down from 9.5 percent a year earlier.

Click here to see recent trends in Colorado's metro areas.
Posted by Ryan McMaken at 10:22 AM