After collapsing in the 4th quarter of 2008, personal income growth has slipped into positive territory. At 0.4 percent, however, growth remains limited.

Colorado data for the third quarter, released last week, showed an increase of .46 percent. Personal income growth fell significantly following the 3rd quarter of 2008, falling almost 2 percent during the first quarter of 2009. The chart below shows recent trends in the state. 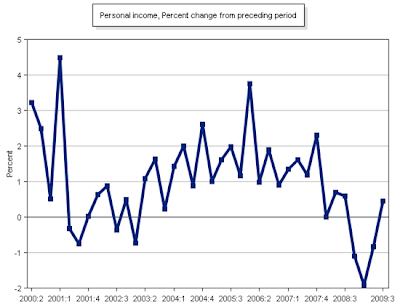 Enactment of ML 2009-28, Appraiser Independence, will be delayed until February 15, 2010. ML09-28 (originally planned for a January 1, 2010 implementation) has two parts: a) prohibition of mortgage brokers and commission-based lender staff from the appraisal process, and b) appraiser selection in FHA Connection. The effective date for both sections of this guidance will now take effect for all case numbers assigned on or after February 15, 2010. This extension will provide FHA and lenders additional time to adjust systems to accommodate the changes.

Detailed instructions on changes to FHA Connection will be issued in a new mortgagee letter. However, lenders should be aware that the requirement for inputting the appraiser ID and the appraisal assignment date in the FHA Connection case number assignment screen will be removed. Instead, lenders will be required to enter all appraisal data, including the appraiser ID, in the Appraisal Update Screen once the completed appraisal is received by the lender and prior to closing the loan.

ML 2009-51, Adoption of the Appraisal Update and/or Completion Report, states an effective date of January 1, 2010. The effective date is being extended and will now apply to all case numbers assigned on or after February 15, 2010. This extension will provide additional time needed by FHA and lenders to adjust their systems to accommodate use of the form.

All FHA Mortgagee Letters can be read online at: http://www.hud.gov/offices/adm/hudclips/letters/mortgagee/
Posted by Division of Housing at 2:26 PM

Speaking at a neighborhood community center, Gov. Ritter said the bill will cut in half the time it takes lenders to sell an abandoned home that’s in foreclosure. This will allow those homes to be re-occupied more quickly so they don’t become a safety hazard, a magnet for vandalism and other crimes, and a drain on nearby property values.

The bill will be co-sponsored in the upcoming 2010 legislative session by Reps. Dianne Primavera and Jeanne Labuda and Sen. Mike Johnston.

“When I took office three years ago, Colorado was already suffering from the foreclosure crisis now gripping the rest of the nation,” Gov. Ritter said. “But working with our partners in the legislature, we took immediate action, including enacting new laws and strengthening the Colorado Foreclosure Hotline.

“Today, Colorado no longer has the worst foreclosure rate in the country,” Gov. Ritter said. “Our strategies are working, but our work is far from finished. The legislation we’re announcing today is the next major step forward to help protect neighborhoods, keep families safe and maintain property values.”

The legislation will allow lenders to accelerate the amount of time it takes to sell an abandoned home that’s already in foreclosure. While many foreclosure sales take seven to nine months, current law calls for a minimum four-month sale process; the proposed bill would cut that in half to two months. This would dramatically reduce the amount of time an abandoned home would sit unattended and unoccupied.

“Homes that sit abandoned and are awaiting foreclosure lower the livability of neighborhoods, reduce property values and marketability, and can increase crime,” Rep. Primavera said. “By cutting the foreclosure proceeding time in half, we can protect our communities by ensuring a great quality of life for families especially during this tough economic time.”

“Abandoned homes facing foreclosure are frequently an eyesore in the neighborhood, and bring down property values of all homes in the area,” said Rep. Labuda. “The current foreclosure process can take months and sometimes years to complete, all while the property sits abandoned. One or two bad homes on a block can certainly destroy a block. This legislation will get homes more quickly occupied, and ensure that even those neighborhoods hit hardest by foreclosure remain vibrant, good places to raise a family and buy a home.”

Thanks to SELA's executive director Theresa Donahue for including DOLA in the conference.

Click here for presentation.
Posted by Division of Housing at 11:20 AM

The November report is available here.

The single-family Metro Denver vacancy survey, and the Colorado Statewide surveys are all updated and posted for the 3rd Quarter.

The survey of deed-restricted vacancies and rents will be available in the next few business days.

The 4th Q data on metro Denver vacancies and rents will likely be available in late January.
Posted by Division of Housing at 9:52 AM

The Office of the Comptroller of the Currency has released its Third Quarter 2009 report on Mortgage Metrics. Click here for the report.

The main thrust of the report is that mortgage performance in the United States continues to deteriorate. Only 87.2 percent of the servicing portfolio is current and performing.

Other notable points include:

Serious delinquencies increased in all risk categories, with the greatest percentage increases in the prime category and the “other” category, which includes mortgages for which credit scores are unavailable. The seriously delinquent rate for prime mortgages, the largest risk category of mortgages in the servicing portfolio, has more than doubled over the last year as financial difficulties have increasingly affected this most creditworthy category of borrowers.

Posted by Division of Housing at 9:39 AM

Foreclosure sales at auction in Colorado’s largest counties fell 13 percent for the period from January through November, as compared to the same period last year. According to a report released today by the Department of Local Affairs - Division of Housing, completed foreclosures showed declines, but new foreclosure filings rose 12 percent for the period of January to November compared year over year. In metropolitan counties, there were 32,744 foreclosure filings and 17,160 foreclosure sales from January to November of last year. There were 36,628 filings and 14,975 sales during the same period this year.

However, no counties reported decreases in new foreclosure filings for the same period. Adams and Denver Counties reported no change in totals, but all other counties surveyed reported increases, with Mesa County and Boulder County reporting the largest increases of 139 percent and 39 percent respectively.

“At this point, it appears very unlikely that the number of completed foreclosures will reach the total set in 2007 and 2008,” said Ryan McMaken, a spokesperson with the Colorado Division of Housing. “November was a relatively light month for foreclosures, but with new foreclosure filings still up compared to last year, foreclosures will continue to be a challenge.”

For all counties surveyed, the overall foreclosure rate was 128 households per completed foreclosure.

All bonds issued from a local government and/or from statewide authorities" direct formula allocations will be subject to the same issuance fee.

If PABs are assigned to another issuer, the recipient becomes responsible for payment.

If a recipient relinquishes its PABs to the Statewide Balance, then the Direct Allocation fee no longer applies.

If PABs are never used, the fee will never be due.

The fee applies to all direct allocations that have not yet been issued, including allocations from 2009 and previous years. The fee does not apply to refinanced or refunded bonds.

The fee starts at 0.0057%, and will be adjusted annually. Since most PAB issuances are for at least $3 million, the smallest fee would typically be $171. Likewise, a $100 million issuance would cost $5,700. The fee is due at the time the bonds are issued.

Statewide Balance (SWB) Fees are unchanged: These fees will remain unchanged from current practice, and include a $750 application fee and a 0.25% issuance fee.

Vacancies in for-rent condos, single-family homes, and other small properties across metro Denver rose year-over-year to 4.6 percent during 2009’s third quarter. The vacancy rate was 3.4 percent during the same period last year, and was 5.2 percent during this year’s second quarter.

According to a report released Wednesday by the Colorado Department of Local Affairs’ Division of Housing, vacancies across metro Denver are up slightly from historic lows reported during 2007 and early 2008, but with rates slipping again below 5 percent, rental markets for single-family homes and condos continue to stabilize.

“I think we’re seeing the number of new units being rented flattening out a bit,” said Susan Melton, a broker/owner with Assured Management in Lakewood. “In the past we were seeing a fair amount of new activity, but not as much now, and that may be related to a lack of rent growth.”

The highest overall vacancy rates were found in Adams County, Douglas County, and the Boulder/Broomfield area with rates of 6.2 percent, 5.7 percent and 5.7 percent respectively. The lowest vacancies were in Jefferson County which reported an overall rate of 3.4 percent.

All counties reported increases in vacancies when comparing the third quarter of last year to the same period this year. The largest increase was found in Douglas County where vacancies increased from 0.8 percent to 5.7 percent year over year.

All counties except Douglas and Denver Counties, however, reported falling vacancies from the second quarter to the third quarter of this year.

During 2009’s third quarter, average rents reached $1059.77 for the region, but significant increases were only reported in Arapahoe County and the Boulder/Broomfield area. Average rents in all other counties have either fallen since the third quarter of last year, or are flat during the same period.

“There’s certainly a demand for some nice rental housing in the Boulder and Broomfield areas,” said Gordon Von Stroh, Professor of Business at the University of Denver, and the report’s author. “But in the metro area overall, it is the case that it is difficult to raise rents much in the current economic climate.”

“Many who are attracted to renting are still drawn by the prospect of avoiding losses on properties they are unable or unwilling to sell right now,” said Melton. “With rent growth so low, renting out a few small properties is not quite as lucrative as it has been in the past.” 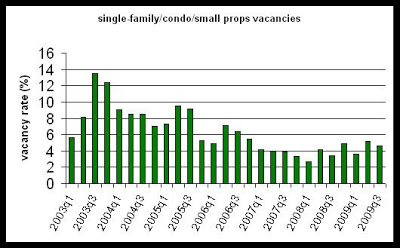 Posted by Division of Housing at 3:57 PM

Request for Statements of Interest

Request for Statements of Interest:

Rebate Program Partnership
The GEO is now accepting statements of interest from utilities, local governments, and non-profits who are interested in providing matching funds to offer rebates for energy efficiency and renewable energy measures installed in their territory. In exchange for matching funds, the GEO will administer the rebate program on the partner's behalf, reserve rebates for customers in the partner territory, provide monthly reports on program status, and comply with required American Recovery and Reinvestment Act compliance and reporting.

Organizations interested in partnering with the GEO should review the infomration found in the Rebates: For Program Partners section of the GEO Web site and submit a completed interest form no later than December 15, 2009. More information can be found by clicking here.