The BLS released its report today on April unemployment in 372 metro areas in the US. The data for Colorado is not different from the statewide report already released by the Colorado Department of Labor and Employment. The chart with local unemployment rates is here.

The map shows how most metro areas are now above the national unemployment rate. 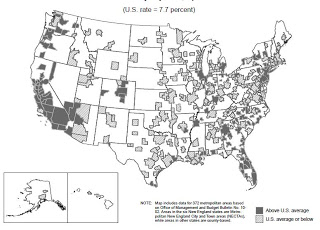 National comparisons remain important insofar as perceptions of the local job market drive household creation in Colorado. As long as Colorado is perceived as being a better job market than many metro areas in the nation, such a perceptions will foster household creation and population growth in the state. In recent months, however, the gap between the Colorado and the national unemployment rate has narrowed with unemployment declining faster at the national level than in Colorado.

Unemployment rates were lower in April than a year earlier in 342 of the 372 metropolitan areas, higher in 25 areas, and unchanged in 5 areas, the U.S. Bureau of Labor Statistics reported today. Ten areas recorded jobless rates of at least 15.0 percent, while 32 areas registered rates of less than 5.0 percent. Two hundred forty-six metropolitan areas reported over-the-year increases in nonfarm payroll employment, 115 reported decreases, and 11 had no change. The national unemployment rate in April was 7.7 percent, not seasonally adjusted, down from 8.7 percent a year earlier.