Housing starts in the West Census region of the US, which includes Colorado, were up 16.9 percent from April 2011 to April 2012, counting both single-family and multi-family units. According to new housing construction and housing starts data released last week by the US Census Bureau, housing starts in the US. West region hit a four-year high and there were approximately 12,400 housing units started in the West during April 2012. Of the new units started, 9,000 were single-family structures and 3,400 were structures containing more than one housing unit. 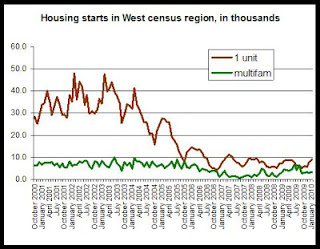 The first graph shows the difference between single-family starts and starts for structures in the West with more than one housing unit. Both remain near ten-year lows, but single-family starts in the West rose 25 percent from April 2011 to April 2012. Starts for structures with more than one unit were flat at 3,400 units over the same period.This runs contrary to local trends in Colorado which indicate that multifamily production is increasing faster than single-family production.

The second graph shows month-by-month comparisons in housing starts for each year in the West. April's housing starts total was a 12.7 percent increase from March. Nationally, the increase during the same period was 11.8 percent. Numbers are not seasonally adjusted. 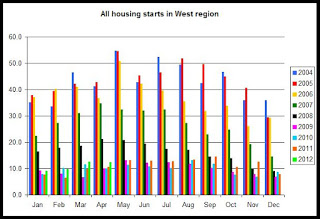 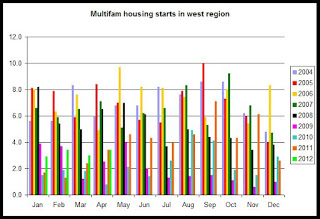 This report is the latest indicator pointing to some slight growth in new construction, but there are few signs, at least regionally, of surges in new housing starts. Multifamily has shown some ongoing signs of multifamily growth at the state level for Colorado, however.
Posted by Ryan McMaken at 3:17 PM