The map shows the counties broken into quartiles according to the number of permits adjusted for the size of the existing housing stock.
Highest quartile: Denver
Second-highest: Larimer, Delta
Third-highest Eagle, Jefferson, Douglas, El Paso, Alamosa
Bottom quartile: Arapahoe, Boulder, Summit, Mesa
All others: no activity 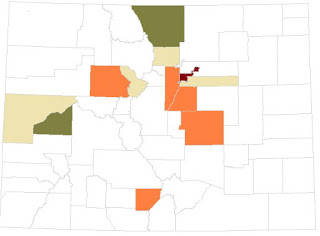 Among the counties that did report growth from 2010 to 2011, the growth rates were as follows:

Conclusions: Among the counties that were active in new multifamily permitting in 2008, most have completely stopped building multifamily units as of 2011. Garfield county, for example, permitted 95 new multifamily units in 2008, but issued zero multifam permits during 2011. This sort of trend has been found in numerous mountain counties. Few counties saw growth from 2010 to 2011, although several Front Range counties has reported substantial growth rates, and those counties tend to be driving statewide totals in multifamily activity.