Resources on the Homelessness Prevention and Rapid Re-Housing Program (HPRP)

The HPRP is part of the American Recovery and Reinvestment Act of 2009.

Here is the original program announcement and summary: http://www.hudhre.info/documents/HPRP_Notice_3-19-09.pdf

Here is a Q and A from HUD on the program: http://www.hudhre.info/documents/HPRP_QA.pdf
Posted by Division of Housing at 10:56 AM

OFHEO's Federal Housing Finance Agency recently released it most recent monthly data. It concluded that there was a 1.7 percent price increase nationwide from December to January.

Here are some recent trends in Colorado data: 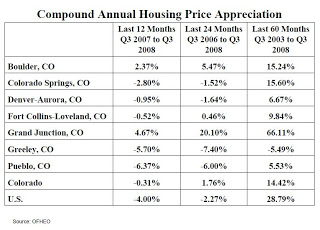 Incidentally, here is the 4th Q data from OFHEO, including local numbers.
Posted by Division of Housing at 2:02 PM

Many new troops will be arriving at the military bases in El Paso county in coming months and years. This will have a significant impact on housing in the Pikes Peak Region. Here is a useful chart on estimates: 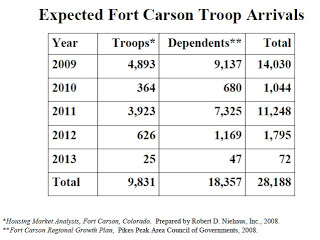 Posted by Division of Housing at 2:00 PM

A new resource in determining eligibility for refinance programs.

Have a look at makinghomeaffordable.gov
Posted by Division of Housing at 2:26 PM

Recent items of interest at the Colorado Division of Housing

For full information, click here.
Posted by Division of Housing at 11:31 AM

First quarter foreclosures are behind 2008 totals

Statement from the Colorado Division of Housing:

We don't have complete month-by-month data for January and February of 2008, but we can extrapolate from this year's monthly data to make a guess about where foreclosures are headed in Colorado this year.

We looked at a sampling of Counties including Adams, Arapahoe, Boulder, Denver, El Paso, Jefferson, Mesa, Pueblo, and Weld Counties. These counties alone account for almost 90 percent of foreclosure activity in Colorado.

Vacancies in for-rent condos, single-family homes, and other small properties across Metro Denver rose to 4.9 percent during 2008’s fourth quarter. According to a report released Thursday by the Colorado Department of Local Affairs’ Division of Housing, vacancies are at their highest level since the fourth quarter of 2006 when vacancies reached 5.5 percent.

Fourth quarter rates are generally expected to increase from the third quarter to the fourth.

In general, a vacancy rate of 5 percent is considered the “equilibrium” rate, and vacancy rates below 3 percent indicate a tight market.

“During 2007 and the first half of 2008, we saw quite a few areas with vacancies down around 3 percent. But rates like that are pretty difficult to maintain under current economic conditions,” said Kathi Williams, Director of the Colorado Division of Housing. “However, single-family rentals continue to be strong relative to the overall rental market.”

According to the report, the metro-wide average rent increased to $995.24 during the fourth quarter, up from $966.01 during the same period a year earlier. Since the third quarter of 2008, rents fell slightly from $998.37.

Rents were highest in the Boulder/Broomfield area at $1453.82, and lowest in Denver County at $920.97. All counties except Adams County reported increases in average rents since the fourth quarter of 2007.

“The cost doing business as a property owner continues to increase,” said Gordon Von Stroh, a professor of Business at the University of Denver, and the report’s author. “Insurance, utilities, and property taxes are all still driving some rental increases.”

Information and brochures for 3 additional DOLA DOH Application and Contract Process trainings being held in Pueblo, Westminster, and Fort Collins have been posted on our website (www.dola.colorado.gov/cdh). Information about the trainings in Durango and Grand Junction will be posted on the website as soon as it is available.

To access the registration information, just click on the Developer's tab on the left side of our home page, then click on the Trainings tab. (http://dola.colorado.gov/cdh/developers/index.htm#Training) Each training is listed separately with the brochure/registration form below it. If you want to register for a training session, just download the form (PDF) and fax Page 2 of the form to Scott Baldwin at 303-866-4077 in order to reserve your space in the training. If you have questions about the trainings, please contact the person listed on the bottom right-hand corner of Page 2 of the specific brochure (i.e. Rick Hanger for Pueblo, Ann Watts for Westminster, and Denise Selders for Fort Collins).

Updated information on how to apply for Neighborhood Stabilization Grants

We've received several requests for more detail regarding the upcoming Request for Documented Quotes (DQ) for training and consulting relating to the Colorado Neighborhood Stabilization Program (NSP), previously posted March 11. That detail follows (full information will be in the solicitation documents):

Training: The purpose of the trainings will be to provide the State, local governments, program practitioners, participating partners, and interested others with skills, tools, materials and information designed to convey the NSP's characteristics, rules and regulations. There will be 2 Train-the-Trainer sessions (June 2009 & January 2010) and 2 large group sessions (July 2009 & February 2010).

Consulting: The vendor that is awarded the contract will act as a timely conduit of housing and community development information published in Federal Register through the Housing and Economic Recovery Act of 2008 (HERA), Neighborhood Stabilization Program (NSP), and American Recovery and Reinvestment Act of 2009 (ARRA). Will notify, analyze, and interpret laws, regulations, rules, & procedures relating to these programs.

As noted in our listserv posting of March 11, any organization wishing to view the full solicitation and submit a bid must register on the Colorado BIDS website (https://www.gssa.state.co.us/VenSols). There is a $40 annual registration fee. See our March 11 posting for more details about BIDS registration.

We always recommend you contact the Colorado Foreclosure Hotline if you are in need of assistance.
Posted by Division of Housing at 3:38 PM

9News story here.
Posted by Division of Housing at 2:39 PM

How to Participate in the Neighborhood Stabilization Bidding Process

The Colorado Division of Housing (CDOH) will soon be issuing a Request for Documented Quotes (similar to an RFP) to contract for training and consulting services to be provided in support of the federal Neighborhood Stabilization Program (NSP). CDOH invites qualified bidders to submit a response to this solicitation.

If your organization thinks it might be interested in bidding for this contract, it will need to register with our state's "BIDS" website. There is a fee of $40/year. All State of Colorado solicitations (RFPs, DQs, and bids) are posted on the BIDS website. BIDS is the only source to obtain solicitations and a bidder must be registered with BIDS for its proposal/quote to be accepted. BIDS is located at: https://www.gssa.state.co.us/VenSols When you get to that main page, click on the "Frequently Asked Questions" link at the top for some useful information about BIDS. When you're ready to register, click "Register" at the top of the main page to begin the process.

You should begin the registration process soon, to be sure you're ready to go when the solicitation is posted.

Thank you in advance for your interest!

Cross-posted here: http://dola.colorado.gov/newsletter/main?newsletter_item_id=901
Posted by Division of Housing at 2:19 PM

This morning at 5:30, 9News and the Division of Housing organized a "Housing Line 9" which was made possible by counselors from Brothers Redevelopment and Adams County Housing Authority.

Tonight, if you're in Colorado Springs or Pueblo, don't miss the mortgage and foreclosure phone bank on KOAA 5/30 from 5-7 pm. It will feature counselors from the Colorado Rural Housing Development Corp. and the Pikes Peak Foreclosure Prevention Partnership.

UPDATE: The Colorado Springs volunteers received 97 calls in 2 hours.
Posted by Division of Housing at 3:18 PM

The Colorado Division of Housing has announced that $250,000 in CDBG funds has been awarded for increasing the availability of affordable housing in Boulder County.

Boulder County's Longs Peak Energy Conservation SFOO Rehab program has been awarded a CDBG grant of $250,000. These grant funds will be used to assist with the repair and rehabilitation of (ten) 10 homes by providing low-interest loans to homeowners earning less than 80% AMI. Historically those assisted by the program have fallen under the 50% AMI level. CDOH funds will be used only in the non-entitlement areas of Boulder County (outside the City limits of Boulder and Longmont).
Posted by Division of Housing at 8:47 AM

Co-chairs of the Colorado Foreclosure Prevention Task Force Kathi Williams (Director, Division of Housing) and Mike Rosser (Colorado State Housing Board) were present at a Town Hall Meeting in Colorado Springs. The meeting was sponsored by Rep. Dennis Apuan and featured a panel of speakers who spoke to solutions available to borrowers in danger of foreclosure. 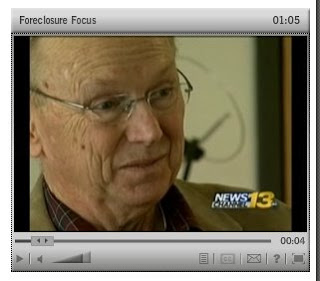 and the KKTV story: 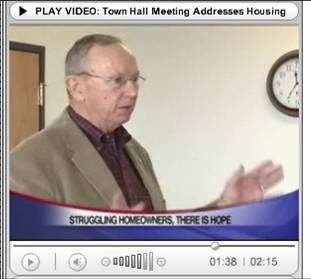 Posted by Division of Housing at 8:04 AM

All vacancy and rent surveys have been updated at least through the 3rd Q of 2008. 4th Q info for single-family rentals and deed-restricted rentals are yet to come: http://dola.colorado.gov/cdh/researchers/index.htm#vacancy

Foreclosure Hotline has busiest month ever

The Hotline ended the month of February 2009 with 4,502 calls, which is 600 more calls than the highest call volume since the Hotline was first announced and received 3,900 calls in October of 2006.

Naturally, the housing counseling staffs at the independent Hotline agencies have been swamped, and call-back times are growing. Hotline staff tells us, however, that this week, things have slowed down a little.