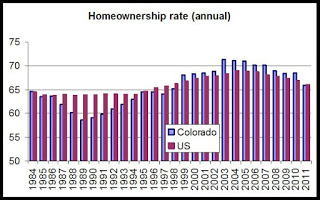 These numbers would seem to reflect the boom in population and homebuilding in Colorado that began in the 1990s and continued up until the financial crisis of 2008. A decline in the homeownership rate began after 2003 in Colorado, but recent trends in real estate in Colorado may be solidifying the trend.

The decline in the homeownership rate should not be viewed, necessarily, as an indicator of a declining economy or as only the result of foreclosure activity.

While foreclosures have certainly contributed to a decline in the homeownership rate, also important is an increase in rental activity.

While foreclosures no doubt contribute top this trend, new household formations also contribute as new households are much more likely to be renter households following the financial crisis of 2008 and the tightening of mortgage lending standards.