MBA: Colorado 6th-best in the nation for delinquencies and foreclosures

During the first quarter of 2012, only six states reported lower percentages of mortgage loans that were were either in foreclosure or were 90 days delinquent. According to the first quarter's national delinquency survey, released earlier this month by the Mortgage Bankers Association, the percentage of mortgage loans in Colorado that are either in foreclosure or are either 90-days delinquent, was 3.91 percent. Nationally, the rate was 7.44 percent. Only Nebraska, Alaska, Montana, Wyoming and the Dakotas reported a delinquency/foreclosure rate that was lower than Colorado's. 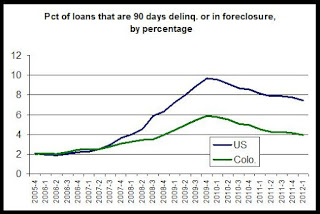 Colorado was also 6th-vest according to the LPS mortgage monitor, analyzed here.