As can be seen in the first graph, condo prices continue to slide from peak levels reached back in 2006. Unlike single-family prices which quickly fell in 2009 and then rebounded somewhat, condo prices have seen a long slide over the past several years. The largest decline is seen in the statewide condo prices, and this is likely due to large dropoffs in prices for condo found in several mountain communities. 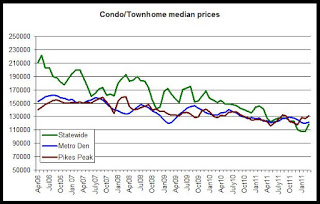 As expected, the data shows that prices in condos and townhomes are significantly lower than single-family home prices.  In recent months, the statewide median price has fallen below that found in both metro Denver and in the Pikes Peak region.

The second graph shows year over year changes in median home prices for condos and townhomes. Metro Denver produced a small price increase during November, but for the most part, year over yeach changes in prices have been all negative since mid-2010. Statewide, year over year drops have been large, with each month showing a 15 percent or more drop for each month from December 2011 to March 2012. Only the Pikes Peak region has shown in increases over the past three months. 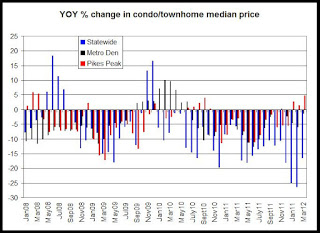