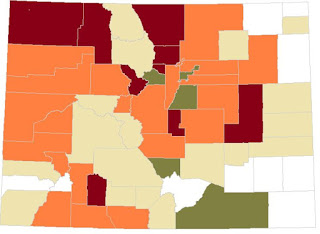 All other counties reported decreases or no change.

Statewide, only a handful of counties drove overall totals in permits from 2010 to 2011. Although some small counites, such as Gilpin and Lincoln, experienced a tripling in single-family permitting, these numbers were very small. In Gilpin county, for example, permits increased from 4 to 16.

What drove most statewide activity in single-family activity was the new permit activity in the larger metro counties such as Boulder, Larimer, Denver and Douglas counties.

The number of single-family permits in these four counties combined increased by 25 percent.

Even fewer counties reported increases when compared to 2008,  that most recent year to reflect peak permitting levels.

These counties have now either surpassed, or on their way to surpassing, peak levels in permit activity experienced during the last expansion. Many other counties are still well below peak levels.

The ten counties that are still fathest below 2008 levels are:

With the exception of Morgan and Pueblo counties, the counties that are farthest below 2008 levels are found in the mountains and on the Western Slope.

If we adjust the number of new permits to the existing number of occupied households in each county, we get a better idea of which counties are adding the most single-family units compared to the existing housing stock.

Among the most populous counties, Jefferson, Pueblo and Mesa counties reported small amounts of single-family permit activity, adjusted for the existing housing stock. 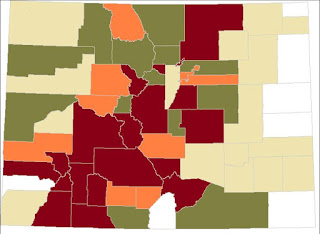