Colorado gained 29,882 jobs in March 2012 compared to March of 2011, and the non-seasonally-adjusted unemployment rate fell year-over-year from 8.7 percent to 8.2 percent. According to the most recent employment data, collected through the Household Survey and released today by the Colorado Department of Labor and Employment and the BLS, total employment in March, not seasonally adjusted, rose to 2.49 million jobs. The labor force also increased from March 2011 to March 2012.

In month-to-month comparisons, the unemployment rate was flat at 8.2 percent from February to March. 4,000 jobs were added month-over-month while 4,500 people entered the work force. 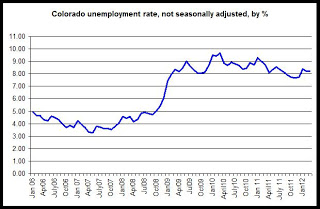 As can be seen in the second graph, total employment and total workforce size have risen slightly, month-over-month, for the past two months after falling for the previous three months. Year over year, employment rose and the labor force rose. However, both remain well below July 2008 peaks. 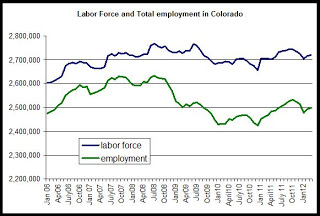 The employment total is now 135,000 jobs below the peak levels experienced during July 2008 when there were 2.63 million employed workers. Compared to the labor force peak in July 2008, the labor force is now down by almost 47,000 workers. 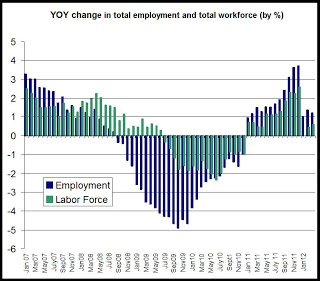 The graph also shows the year-over-change in the labor force. Total labor force size rose slightly from March 2011 to March 2012 for the second month in a row, and follows a slight decrease that occurred from January 2011 to January 2012. The labor force size had shrunk, year over year, for 18 months in a row from July 2009 to December 2010.

Note: This analysis reflects newly revised data released in January. In most cases, total employment was revised upward for the months of 2011.
Posted by Ryan McMaken at 9:16 AM