NAR: Home sales down in U.S. West, but prices up

The median home price in the West region of the U.S., which includes Colorado, rose 1.6 percent from March 2011 to March 2012. According to new existing home sales data, released today by the National Association of Realtors, the median home price rose nationally and in all regions except the Northeast region where the median price fell 1.9 percent. 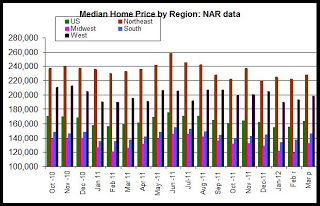 According to today's report, home sales transactions (closings) fell 1.0 percent, from March 2011 to March 2012, in the West region while nationally, sales rose 4.0 percent during the same period. All regions reported year-over-year increases in sales activity except the West region. The largest increase was reported in the Northeast where sales rose 13.9 percent.

Overall, March's sales activity was higher than was the case during March of last year. 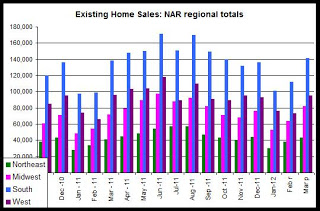 In short, home sales have increased in most of the country when compared year over year, and median home prices have begun to move up. Although the region-wide data from NAR showed a small decline in home sales transactions,Colorado data shows growth in home sales activity in recent months. Recent data on releases of deeds of trust also suggests more sales and refinance activity. More transactions are taking place, and the most recent home price data from sources other than the Realtors, such as FHFA and Case-Shiller, also suggest some mild increases in home prices during the first quarter of 2012.
Posted by Ryan McMaken at 10:21 AM