New single-family home sales were at the lowest total reported during March in more than ten years  in the West region of the US, which includes Colorado. According to Tuesday's New Home Sales report, released by the Census Bureau,there were six thousand new home sales in the Western U.S. during March 2012.

The report, which monitors sales activity for newly constructed houses, reported that in the West, new home sales were down 14 percent during March 2012 from the 7,000 new homes sold in March 2011. Nationwide, sales rose 14 percent, rising from 28,000 to 32,000 during the same period.

At 6,000 new home sales during March, sales are also down from February 2012's total of 8,000, signaling weakness in the regional homebuilding market going into the warmer spring season. 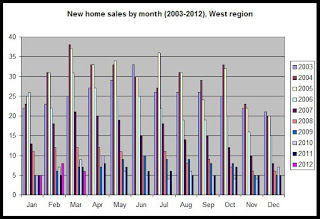 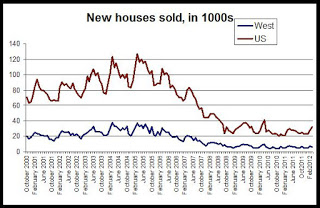 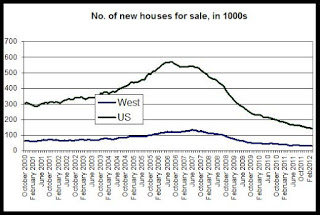 The number of new single-family homes for sale in the West remained near Febuary's ten-year low during March.

As a final note, we can also look to the new home inventory. In this case, we calculate inventory by subtracting the number of new home sales in a given month from the number of new homes for sale at the end of the previous month. In the final graph, we see that the inventory is now at a ten-year low of 24,000 homes. This is good news for owners seeking to sell homes since it suggests that fewer new homes are sitting and waiting to be sold, thus diminishing some of the inventory-driven downward pressure on prices. 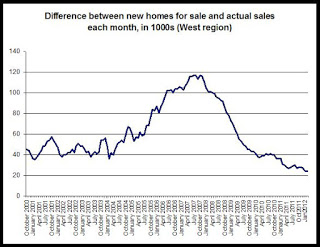 Overall, this report shows that new home sales are not recovering quickly, and in spite of some mild rebounding in single-family permit activity (see here), new home activity is largely flat or declining and that totals are still near the same levels they were during the 2008-2009 recession. Inventory of new homes continues to decline which is good news for many people looking to see existing homes.
Posted by Ryan McMaken at 3:04 PM