Denver Case-Shiller index up for second month in a row

Case-Shiller released its home price index for February today. The home price index for the Denver area fell 0.9 percent percent from January to February, but rose 0.5 percent, year over year, from February 2011 to February 2012.  The year-over-year increase in February was the second year-over-year increase in a row for Denver, and was the second increase overall since June 2010. The first graph shows the index values since 2001: 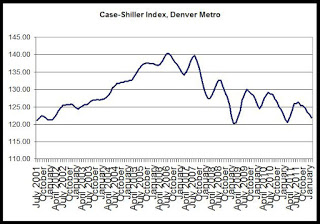 “While there might be pieces of good news in this report, such as some improvement in many annual rates of return, February 2012 data confirm that, broadly-speaking, home prices continued to decline in the early months of the year,” says David M. Blitzer, Chairman of the Index Committee at S&P Indices. “Nine MSAs -- Atlanta, Charlotte, Chicago, Cleveland, Las Vegas, New York, Portland, Seattle and Tampa -- and both Composites hit new post-crisis lows. Atlanta continued its downward spiral, posting its lowest annual rate of decline in the 20-year history of the index at -17.3%. The 10-City Composite declined 3.6% and the 20-City was down 3.5% compared to February 2011".


In year-over-year comparisons for February, Atlanta showed the largest drop, with a decline of 17.3 percent, while the index in Las Vegas fell 8.5 percent. Year over year, home price indices fell in 15 of the 20 cities included in the study. Only Detroit, Denver, Minneapolis, Miami and Phoenix showed increases. 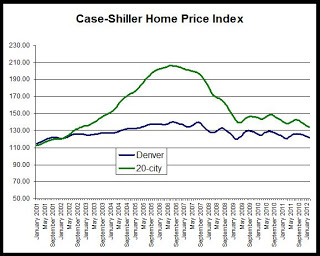 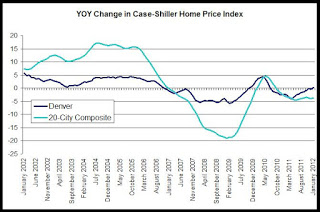 The last chart provides a closer look at year-over-year changes in the Denver index. Note the the change was below zero between June 2010 and December 2011, and likely reflects the end of the homebuyer tax credit’s end which has led to a fall in demand and a decline in the home price index. The upward trend in the index in response to the tax credit is clear during late 2009 and early 2010. Since the end of the credit, however, home prices consistently drifted downward until January 2012. 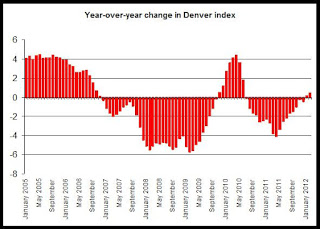