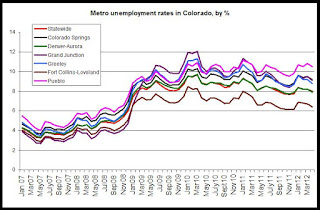 Total employment did increase in the Ft. Collins area and in the Denver area, and it was essentially flat in Grand Junction.

The following numbers reflect how far below the most recent peak are the February 2012 employment totals:

By far, Grand Junction remains the furthest below peak levels, with the Colorado Springs area also dipping almost 8 percent below the peak. We see here also that the Ft. Collins-Loveland area has one of the strongest markets.