The homeowneship rate in Colorado during the first quarter of 2012 was 64.5 percent, down from last year's first-quarter rate of 65 percent and down from 2011's fourth-quarter rate of 64.9 percent. The homeownership rate is now at the lowest rate reported since the Census Bureau first began publishing quarterly statewide rates during 2005.

The graph shows the change in the homeownership rate over time in Colorado and in the Denver-Aurora area. The homeownership rate has decreased over time in both geographic areas, and the downward trend also appears to have accelerated somewhat since the end of 2009. This may be due to the increasing importance of rental housing to the overall real estate economy in Colorado and the metro Denver area. 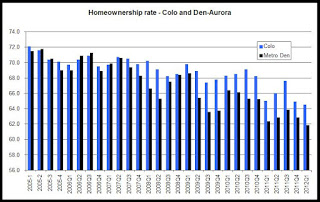 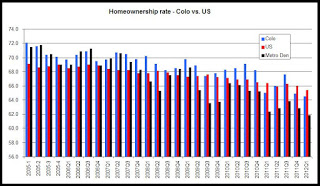 As noted in this article, this can be due to a variety of factors including greater demand for rental housing among young, newly formed households and also the effect of foreclosures. Increased urbanization in Colorado can also be a factor as rental housing close to urban employment centers becomes more popular, and as much of the new multifamily construction in the state is occurring near or in downtown Denver.

We can also note that from 2010 to 2011 new multifamily permitting increased by more than 100 percent, while it increased only 4 percent for single-family units designed for homeownership.
Posted by Ryan McMaken at 2:16 PM