According to the mortgage bankers association, there were 19,434 loans in the foreclosure process as of the end of the fourth quarter of 2011. During the first quarter of 2012, 4,221 of those, or 22 percent, loans proceeded to final foreclosure sale at auction.

At 22 percent, the amount of the foreclosure inventory that procceded to auction sale is fairly typical for trends seen over the past three years. 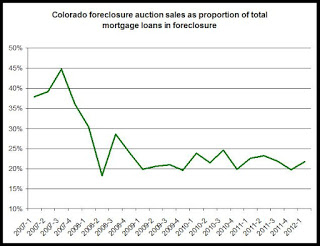 This percentage has generally ranged between 20 percent and 24 percent over the past three years, and this suggests that during recent quarters, almost 80 percent of loans in foreclosure during a given quarter are either still moving through the process or are avoiding foreclosure through short-sale, loan modification or some other action that prevents final foreclosure.

We can see in the graph that this percentage declined substantially after 2007 and 2008. Before 2008, as much as 40-45 percent of the foreclosure inventory was proceeding to sale during a single quarter.  Since then, the pace of processing foreclosures has clearly slowed. This trend likely reflects the rise of foreclosures as a national issue which forced many servicers to revise their methods.

Meanwhile, the number of loans serviced in Colorado increased 0.02 percent during the first quarter of 2012, rising to 967,156 loans (according to the Mortgage Bankers Association's sample.)  As can be seen in the second graph, the total number of loans serviced in Colorado has declined significantly since late 2007. Total loans peaked during the third quarter of 2007 and has usually declined each quarter since. The foreclosure inventory grew until the second quarter of 2009 but then began to trend with total loans. 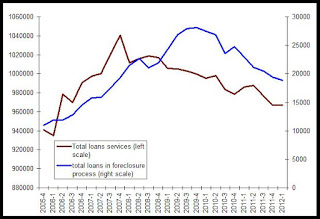 The foreclosure inventory is expected to continue to decline as total loans serviced declines. With fewer loans to foreclosure, this also suggests that it is unlikely that foreclosure activity will return to 2007-2009 levels unless the employment situation experiences severe shocks that significantly push down total employment.
Posted by Ryan McMaken at 4:44 PM