According to the Housing Vacancy Survey for the first quarter of 2011, released on last month by the Census Bureau, the vacancy rate in for-sale housing in Colorado fell year over year to 2.1 percent from 2011's first-quarter rate of 2.2 percent. The vacancy rate in for-sale housing in the Denver-Aurora area also fell yeear over year, dropping to 1.9 percent from 2011's first quarter rate of 2.3 percent.

Nationanlly, the vacancy rate was slightly higher, and was 2.2 percent during the first quarter of 2012. That's down from 2011's first quarter rate of 2.6 percent.

The vacancy rate in for-sale residences is difficult to measure and is based on information collected from homeowners. If the homeowners report that the unit has been recently vacant or will be vacant in the near future, the unit will be counted as vacancy if other conditions are met as well. The units included must not be rental units. 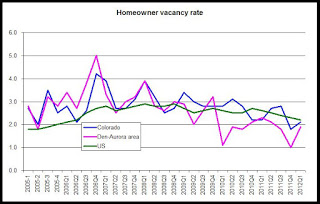 Recent data on home sales suggests that demand for homes continues to build in the Denver area, and also in Colorado overall. Recent increases in demand for for-sale properties may also be reducing turnover time in these properties, and may be contributing to faster turnover in foreclosures properties. This would in turn drive down the vacancy rate in owner-occupant properties.

As the HVS Q and A page notes, many foreclosing properties may not show up as vacant "for sale" properties.

The Denver-Aurora vacancy rate has been below the national rate since 2010, and this falling vacancy rate in the Denver area relative to the the nationwide vacancy rate may reflect declining foreclosure totals in Colorado as well as ongoing demand due to relatively strong household formation.
Posted by Ryan McMaken at 3:14 PM