After many months of year-over-year declines in Corelogic's Home Price Index (HPI),
Colorado showed a 3.0 increase during March 2012, marking the third month in a row during which CoreLogic has reported a year-over-year increase. The March HPI report, released this month by Corelogic, shows the national HPI rising by 0.6 percent, year over year. 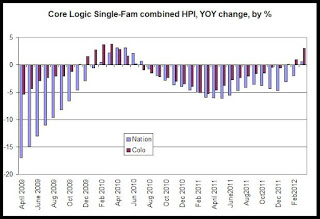 March 2012 was the third month since mid-2010 to show a positive year-over-year change in the HPI in Colorado. Annual declines have been common since 2009, although the trend in declines was interrupted briefly by the homebuyer tax credits which created some annual gains in the HPI in Colorado and nationally from late 2009 to mid-2010.

The annual increase in the HPI of 3.0 percent during March reflects to a certain extent other home price indices, such as the Case-Shiller index and the FHFA's expanded house price index. Indeed, the Case-Shiller index for February 2012 (the most recent data available) showed the second positive year-over-year increase in 21 months, with an increase of 0.5 percent. The CoreLogic HPI for March shows one of the larger gains in home prices for the state, although most indices now do show some small increases during the first quarter of the year.

The CoreLogic HPI shows that, nationally, home prices have fallen more than prices in Colorado and that Colorado prices are increasing at a faster rate.

In the March report, only 7 states reported larger year-over-year increases than Colorado. The states wit the largest increases were Wyoming and West Virginia with increases of 5.9 percent and 5.3 percent, respectively. The states with the largest declines in the home price index were Illinois and Delaware with drops of 8.3 percent and 10.6 percent, respectively.
Posted by Ryan McMaken at 3:55 PM