The home sales index for March 2012 was at the highest index value for March since 2009. The index, which is just a 3-month moving average for sales totals provided by the Colorado Association of Realtors, was at 2,259 sales during March 2012, which is up 9.6 percent from March 2011 when the index was at 2,059 sales. This article examines single-family homes only.

The first graph shows the 3-month moving average for each month. There is a large seasonality factor in monthly sales totals, but the graph shows that in recent months, home sales totals have been well above what has been seen during the same months of 2009, 2010 and 2011. 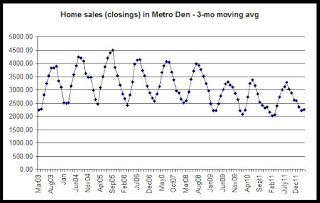 This tells us that home sales activity is up, and it has been up, when compared to the same during the previous year, for the past eight months.

Looking at the broader trend, we also find that home sales activity is up. In the 12-month moving average, which removes the monthly seasonal issues, we see that there have been six months in a row of year-over-year increases. Sales totals are still down significantly from where they were during 2005 and 2006, but they have come up about 9.5 percent from the sales nadir reached during May 2011.

We see a similar trend statewide in home sales, where the home sales index has been up, year over year, for each of the past nine months. 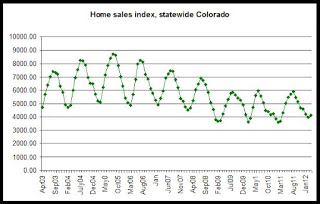 We also see an overall building trend of more sales activity at the statewide level in the 12-month moving average. The 12-month average has been up year over year for the past six months, and reached a growth rate of 6.9 percent during March 2012, which is the largest growth rate since October 2005.  We can see that teh 12-month overage overall has been building since June of 2011: 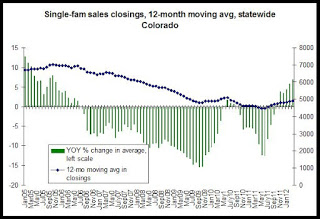 While metro Denver and statewide markets have shown some of the largest increases we've seen in years, Colorado Springs, on the other hand, has shown some signs of moderation in its home sales. The 3-month moving average in sales increased only 1.3 percent, year over year for March, and the 12-month moving average actually declined slightly from February to March 2012. (See graph.) 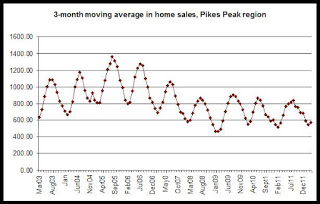 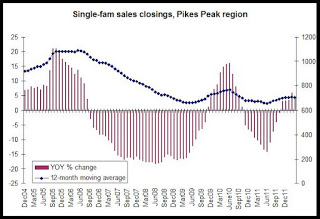 Demographics continue to benefit home sellers. Inmigration looks to continue to be relatively strong while new single-family production continues to be 60 to 70 percent below peak levels. Increases in home prices continues to be rather moderate, and suggests that new home construction is not about to boom.
Posted by Ryan McMaken at 2:07 PM