Nationwide, new unemployment claims were down 41 percent from the first quarter of last year to the same period this year.

Extended mass layoffs were up 166 percent percent in Colorado from the first quarter of 2011, rising from 3 events to 8 events over the year. 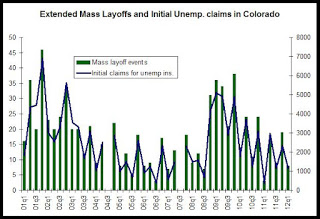 Over the year ending in the first quarter of 2012, the number of private nonfarm extended mass layoff events declined in 16 of the 18 major industry sectors. The manufacturing and the construction sectors experienced the largest declines in the numbers of worker separations over the year. Fourteen of the 21 manufacturing subsectors experienced over-the-year decreases in the number of layoff events.

In the second graph, we see the year-over-year changes in initial claims for both the US and Colorado.Year-over-year changes in new unemployment claims have been down during most quarters since 2010. The large year-over-year increase during the first quarter of 2012 mostly reflects the very low number of claims that occurred during the first quarter of 2011. At this time, nothing suggests a reversal of the overall downward trend seen in graph 1. 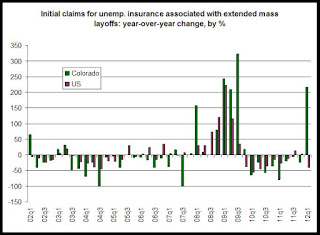 The ongoing declines in mass layoff events and claims suggest a slow and ongoing recovery in the job markets, although the volume in job creation has yet to prove sufficient to absorb new additions to the labor force, and has been noted nationally, the size of the labor force continues to shrink.
Posted by Ryan McMaken at 3:55 PM