NAR: Median home prices in region at highest level since May 2010

The median home price in the West region of the U.S., which includes Colorado, rose 15.9 percent from April 2011 to April 2012,rising to the highest median price recorded since May 2010. According to new existing home sales data, released today by the National Association of Realtors, the median home price rose nationally and in all regions, with the West posting the largest year-over-year increase of all regions. 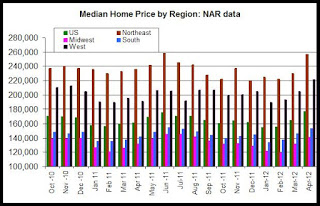 According to today's report, home sales transactions (closings, not seasonally adjusted) rose 1.0 percent, from April 2011 to April 2012, in the West region while nationally, sales rose 6.7 percent during the same period. All regions reported year-over-year increases in sales activity. The largest increase was reported in the Northeast where sales rose 15.6 percent.

Overall, April's sales activity was higher than was the case during April of last year. 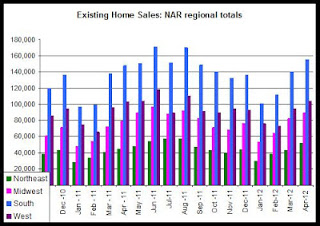 These numbers suggest continued slow and stead growth in home prices. Price growth, however, is moderated by sales of foreclosed properties and short sales. Local real estate professionals report that the most activity in purchases is occurring at the lower price levels below $300,000.
Posted by Ryan McMaken at 8:58 AM