New hires and layoffs up in April, in U.S. West

The number of new hires in the U.S. West, which includes Colorado, rose 1.6 percent year over year from March 2011 to March 2012, as layoffs climbed 8.4 percent during the same period.

According to the latest Job Openings and Labor Turnover report (JOLTS), released Tuesday by the U.S. Bureau of Labor Statistics, the West reported an increase in new hires, and the nation overall showed a 2.0 percent increase in new hires, when compared year over year. During the same period, layoffs fell 0.3 percent in the nation overall, although they increased significantly in the West region. (See Table 9 of the report.) 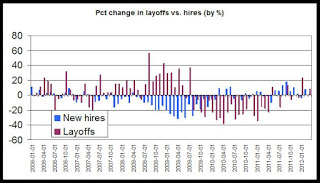 
Note that when total hires (the blue line) are above total separations (the purple bar) then a positive net number of jobs have been added to the economy. March 2012 was the second month in a row during which new hires have exceeded separations in the West region. This followed two month in which separations outnumbered new hires. So far, overall new hiring activity looks similar to 2010 and 2011. 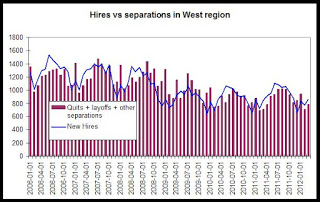 According to Colorado's jobs report for March 2012, March was a productive month for job growth, although the rate of growth was less robust than previous months, when compared year over year, See here for more.

With layoffs growing more than new hires, this report suggests some weakness in the job market, although job creation does continue to take place. Nationwide job growth in April was disappointing and national GDP growth was revised down to 2.2 percent during the first quarter signalling ongoing challenges in the economy.

Note: The JOLTS employment data is tied to the Establishment Survey which does not cover small business hiring and self-employed persons.The BLS recent made some significant revisions to employment data at year-end 2011. This analysis reflects the new revised data.
Posted by Ryan McMaken at 11:16 AM