The first-quarter 2012 delinquency survey from the Mortgage Bankers Association is still about 6 weeks away, but until then, we can look a little more closely at the foreclosure inventory in Colorado and at some recent trends.

The first graph shows the decline over the past four years along with the trend in the total number of loans in the foreclosure process. 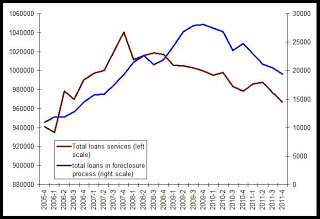 The Division of Housing has monitored foreclosure filings and foreclosure sales at auction in Colorado since the first quarter of 2007.

The total number of foreclosure sales at auction in a single quarter peaked back during the third quarter of 2007 at 7,117 sales. Since then, there has rarely been a quarter with more than 6,000 auction sales, and totals have generally ranged between 5,000 and 5,800.

In other words, while foreclosure auction sales show no sustained increases from early 2007 to late 2009, the foreclosure inventory in Colorado increased more than 75 percent.

The second graph shows foreclosure auction sales as a percentage of all loans in foreclosure. Also shown is the total number of loans in the foreclosure process.

As the total foreclosure inventory grew between 2007 and 2009, total auction sales showed no clear trend, either up or down. This led to a significant decline in the percentage of all foreclosing loans that went to auction sale during the quarter.

In the second graph, we see that since 2009, the proportion of loans in foreclosure that proceeded to auction sales has been largely stable between 20 and 25 percent. 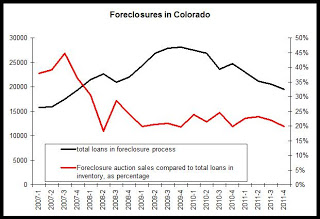 Method: The foreclosure inventory data is based on the national delinquency survey published by the Mortgage Bankers Association. MBA states that its survey covers more than 80 percent of outstanding mortgage loans. This analysis assumes that survey penetration has not changed substantially over time.

Foreclosure auction sales totals are taken from the Division of Housing's quarterly foreclosure reports.
Posted by Ryan McMaken at 2:51 PM