The number of closings in all three measures has increased, year over year, each month for the past eight months (July 2011-Feb 2012). 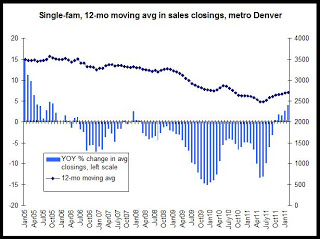 The second graph shows the same measurements for Colorado statewide. The year-over-year change in the statewide average for home sales turned positive in February for the fifth time in 15 months. Statewide, transactions moved into positive territory in response to the homebuyer tax credits that were were offered in 2009 and 2010, but moved into negative territory again after the expiration of the credits. The statewide moving average increased 5.7 percent in February, year over year, and was the largest increase recorded since 2006. 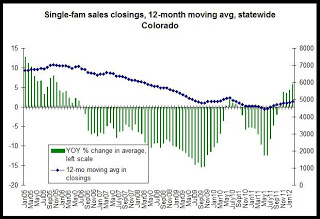 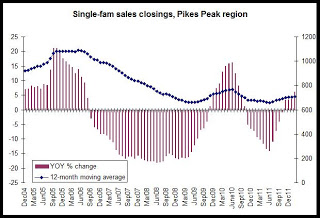 Conclusions: Sales activity continues to show signs of growth, and in some cases is at multi-year highs. Interestingly, new sales activity has not necessarily translated into robust growth in home prices. Home price data shows prices to still be essentially flat in many areas, or even decreasing, according to FHFA and others. See the home price archive for more.
Posted by Ryan McMaken at 10:01 AM