Following many months of year-over-year declines in Corelogic's Home Price Index (HPI),
Colorado has now shown four months in a row of year-over-year increases with April's increase coming at 4.2 percent.  The April HPI report, released this month by Corelogic, shows the national HPI rising by 1.1 percent, year over year. 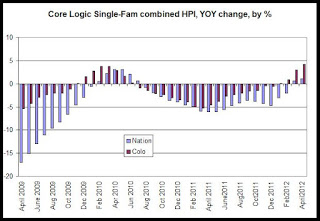 April 2012 was the fourth month since mid-2010 to show a positive year-over-year change in the HPI in Colorado, and April increase was the largest increase reported in more than three years. Annual declines have been common since 2009, although the trend in declines was interrupted briefly by the homebuyer tax credits which created some annual gains in the HPI in Colorado and nationally from late 2009 to mid-2010.

The annual increase in the HPI of4.2 percent during April is one of the larger increases shown in home price indices for Colorado and its metros put out by various organizations.  Case-Shiller, for example, reported a 2.6 percent increase for metro Denver in March (the most recent month available) while Corelogic reported an increase of 3 percent for that month.

The CoreLogic HPI shows that, nationally, home prices have fallen more than prices in Colorado and that Colorado prices are increasing at a faster rate.