The first graph shows year-over-year change in both Colorado and the US.  In 2009, Colorado per capita income fell further than was the case in the US overall.

Also notable is that overall annual growth since 2002 have not matched the growth seen during the boom years of the late 1990s. (All growth rates are year-over-year.) 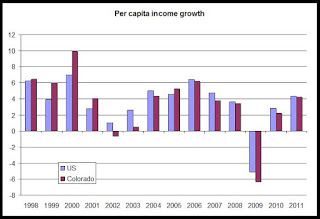 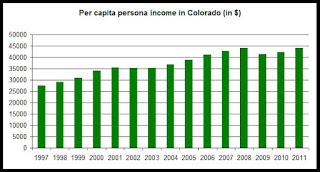 One possible factor may be the relatively small amount of per capita personal income growth in Colorado during this period. The third graph shows that among several states that were hard hit by foreclosures after 2008, Colorado ranked last for per capita personal income growth in most years. In 2002, Colorado was the only state to experience a decline in income, when compared to the states of AZ, CA, FL, and NV. During the years of 2002, 2003, 2004, and 2006, Colorado experienced the smallest amount of income growth among all these states. 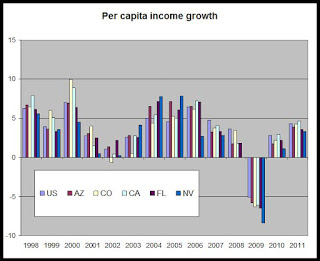