The first graph shows the median single-family home price for the state and for the metro Denver and Pikes Peak regions. Median home prices fell dramatically in all three measures following the financial crisis of late 2008, but moved back up quickly by mid-2009. Since mid-2009, however, median home prices have been largely flat in metro Denver. In the Pikes Peak region, on the other hand, the median price remains well below peak levels and continues to decline slowly following a new 2010 peak.  Statewide, as is typical, the median price has been more volatile, but has not recovered as much as the metro Denver median. Statewide, declining prices in western Colorado are a factor in statewide price declines. 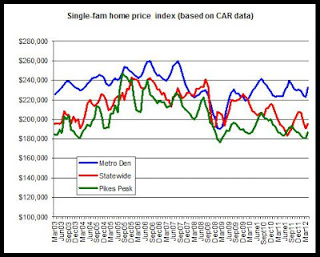 The second graph shows that the Denver median price has shown the most growth when compared to Colorado statewide and the Pikes Peak region. Only Denver has shown any significant year-over-year increases since early 2011. The pattern for the metro Denver area right now appears to be one of acclerating growth in median home prices, which also mirrors data from Case-Shiller. 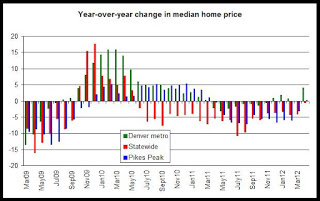 Recent home sales transaction data indicates that demand for home purchasing continues to build. However, this has not yet translated into sustained and significant home price increases beyond metro Denver and northern Colorado. Bargain hunting and demand among the lower price ranges has combined to keep median prices below what was seen during peak levels several years ago.

The home price data provided by the Colorado Association of Realtors is based on home sales transactions that are listed in the MLS systems for each area and do not include for-sale-by-owner transactions or new homes sold directly by home builders.
Posted by Ryan McMaken at 4:34 PM