Total employment growth in Colorado in May continued to show slight growth statewide in the year-over-year comparisons. In May, total employment in Colorado was down 126,000 from the July 2008 peak. Employment trends in various regions of the state differ, however, so this article looks at which regions of the state have the highest unemployment rates, and which regions have recovered the most in their labor markets. 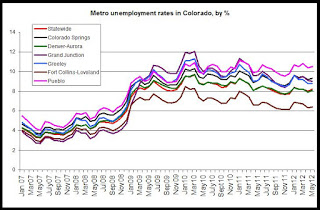 The following numbers reflect how far below the most recent peak are the May 2012 employment totals:

By far, Grand Junction remains the furthest below peak levels, with the Colorado Springs area also dipping more than 7 percent below the peak. We see here also that the Ft. Collins-Loveland area has one of the strongest markets, with Greeley also moving toward peak levels.