Existing home sales in the U.S. West region, which includes Colorado,  increased 7.7 percent from May 2011 to May 2012. According to new existing home sales data, recently released by the National Association of Realtors, the median home price rose more in the West than in any other region, rising 13.4 percent, year over year. The median home price in the Northeast, on the other hand, rose 3.8 percent from May 2011 to May 2012. 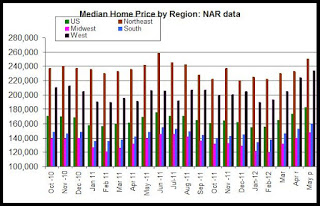 Home sales transactions (closings) rose 7.7 percent in the West region, which was the smallest increase in home sales closings of any region, year-over-year. Home sales rose 21 percent in the Midwest from May 2010 to May 2011, and closings rose by 11 percent nationally during the same period.

The second graph shows closings by region. In general, closings increased each month from January 2012 to May 2011, following seasonal patterns. All regions showed a month-over-month increases, and all regions showed increases in the year-over-year comparisons for May. 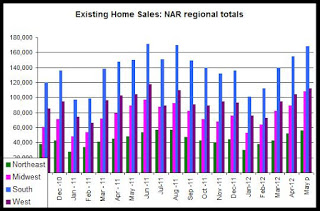 The NAR data tends to be one of the more optimistic among the various reports on home prices and home sales activity, reporting larger increases than what we've seen regionally or locally. See here for more.

According to NAR, home closings were hampered by a lack of inventory. According to the NAR press release:


There are broad-based shortages of inventory in the lower price ranges in much of the country except the Northeast, and in the West supply is extremely tight in all price ranges except for the upper end. "Realtors® in Western states have been calling for an expedited process to get additional foreclosed properties onto the market because they have more buyers than available property," Yun added. Widespread inventory shortages also are found in much of Florida.