In Colorado's metro areas, all areas except Boulder, Ft. Collins and the Denver area showed year-over-declines from May 2011 to May 2012. Grand Junction and Pueblo showed the largest drops. 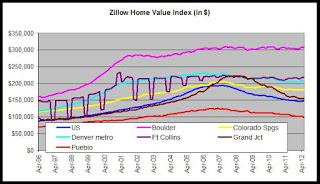 Overall, the strongest markets, in terms of home prices, are Boulder, Ft. Collins and Denver, while the weakest markets are Grand Junction and Pueblo.