The House Price Index (HPI) rose from the first quarter of 2011 to the same period this year in every Colorado metro area except Colorado Springs, Pueblo and Grand Junction. The areas showing increases in the HPI included Boulder, Denver-Aurora, Greeley, and the Ft. Collins-Loveland area.

The first quarter HPI data, released last month by the Federal Housing Finance Agency for hundreds of metropolitan areas nationwide, shows continued declines in southern and western Colorado. Prices in Colorado Springs, Pueblo and Grand Junction have fallen, year over year, in each quarter since early 2011.

Statewide, with Colorado home price index was up year over year while the national index dropped. (See the analysis here.)

The first graph shows the year-over-year change in each region for each quarter. For the sake of visual clarity, the graph only shows data back to 2008. 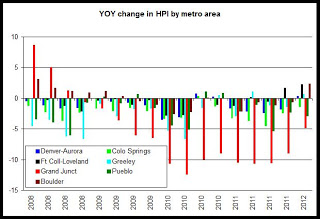 Since the fourth quarter of 2008, the year-over-year changes have been generally negative. The graph also shows us that:

-Grand Junction and Pueblo have consistently shown some of the largest decreases in recent years. 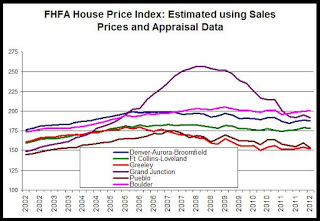 This report overall suggests that while there is a fair amount of price stability in many areas of Colorado, prices continue to fall outside the most robust areas of northern Colorado and metro Denver. When compared with Case-Shiller and local Metrolist data, we can say that through the first quarter of 2012, weakness in demand for for-purchase housing persists, but that losses in value are diminishing in each new time period. The CoreLogic index showed some small year over year increases in single-family homes. See here for more.

The index values presented and analyzed in this article are not seasonally adjusted. The data in this article is taken from the FHFA "all-transactions" data. The index is based on home price data obtained through the GSEs such as Fannie Mae and Freddie Mac.
Posted by Ryan McMaken at 12:53 PM