The Philadelphia Fed released its February Leading Index for the 50 states and the nation on Tuesday. Colorado's index value was 2.18, putting it ahead of 29 states with lower index values, and behind the US's leading index value of 3.25.

The Philly Fed's Leading Index is "a six-month forecast of the state coincident indexes." Our most recent analysis of Colorado's coincident index value can be found here.

The coincident index is a general measure of economic activity based on a variety of factors, so Colorado places more or less in the middle of the states as to its predicted economic growth over the next six months. 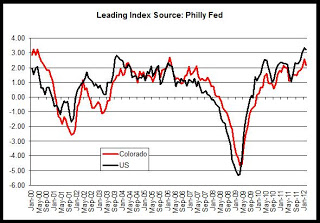 Leading-index predictions for both the state and the nation have indicated positive growth since 2010, with Colorado lagging. If the current growth period is similar to that of 2003-2007, we will see another period in which Colorado growth did not match the economic growth experienced by much of the nation. Nevertheless, the unemployment rate in Colorado is below the national rate, and household formation has been solid in Colorado in recent years.

In short: The Philly Fed's report indicates that the Fed expects continued positive growth in Colorado, but at levels below that which is expected in the US overall. Smaller growth rates than Colorado's are expected in the majority of states.
Posted by Ryan McMaken at 1:54 PM