New home sales in February flat since 2010 in Western U.S.

New single-family home sales were flat in February in the West region of the US, which includes Colorado. New home sales during February were tied at the second-lowest February total in the past decade.

However, at 7,000 new home sales during February 2012, sales are flat with February 2010's total of 7,000, signaling that little has changed since the days following the official end of the 2009 recession. 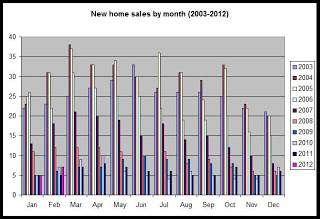 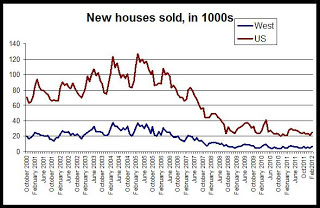 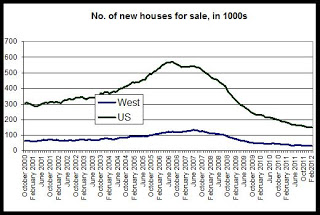 The number of new single-family homes for sale in the West reached a new low during February and is now at the lowest level it's been in more than ten years.

As a final note, we can also look to the new home inventory. In this case, we calculate inventory by subtracting the number of new home sales in a given month from the number of new homes for sale at the end of the previous month. In the final graph, we see that the inventory is now at a ten-year low of 25,000 homes. This is good news for owners seeking to sell homes since it suggests that fewer new homes are sitting and waiting to be sold, thus diminishing some of the inventory-driven downward pressure on prices. 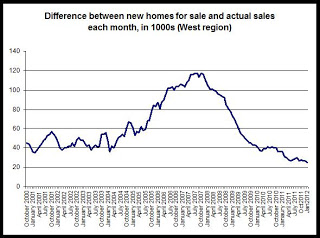 Overall, this report shows that new home sales are holding steady, and have stopped declining, but that totals are still at the same levels they were during the 2008-2009 recession. Inventory of new homes continues to decline which is good news for many people.
Posted by Ryan McMaken at 9:22 AM