Total employment growth in Colorado in January continued to show growth statewide in the year-over-year comparisons. In January, total employment in Colorado was down 155,000 from the July 2008 peak. Employment trends in various regions of the state differ, however, so this article looks at which regions of the state have the highest unemployment rates, and which regions have recovered the most in their labor markets. 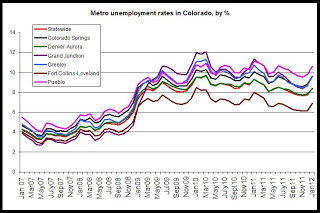 The following numbers reflect how far below the most recent peak are the January 2012 employment totals:

The Pueblo area and the Denver-Aurora areasare nearest to peak levels, although Pueblo still reports a high unemployment rate.

We expect the demand for housing to continue to be strongest in the Fort Collins-Loveland area and in metro Denver.