February CPI growth at 4-year high, fuel and apparel up

The Bureau of Labor Statistics released today the February CPI for US urban areas and regions. In the West region, from February 2011 to February 2012, the CPI increased 2.5 percent. This is larger than the year-over-year increases for February of 2009, 2010 or 2011, during which the change in CPI never exceeded 2 percent.

In the first graph, we can see that the CPI growth in February 2012 was the largest annual change for February since 2008, prior to the financial crisis of October 2008. 2005 through 2007 also showed higher annual changes. 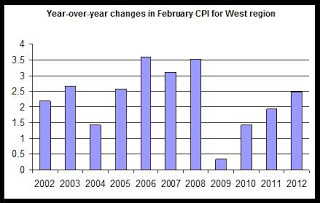 The index increases are being driven by increases in prices in apparel, food and transportation. Transportation and apparel prices both increased by 4.3 percent, year over year. Food costs also increased, rising 3.2 percent.

Housing prices increased less with a year-over-year increase of 1.8 percent. Although annual increases in rent (according to State of Colorado data) have exceeded 5 percent in many areas of the state, the housing component of CPI also reflects declining and stagnant home prices, which indirectly mitigate the increases in rent levels within the index.

The second graph shows year-over-year changes in CPI for all months since 2002. Annual CPI growth hovered around 3 percent for much of 2011, but has been declining during the past five months. 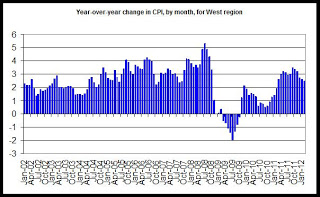 The gasoline index rose sharply in February, accounting for over 80
percent of the change in the all items index. The gasoline increase
led to a 3.2 percent rise in the energy index despite a decline in
the index for natural gas. The food index was unchanged in February,
with the food at home index unchanged for the second month in a row
as major grocery store food indexes were mixed.