House prices in January in the Mountain region, which includes Colorado, were nearly flat, falling 0.004 percent, year-over-year, which is essentially a change of zero percent. Nationally, the house price index fell slightly, dropping 0.7 percent. The new house price index numbers, released today by the Federal Housing and Finance Agency, also showed that the national index is down 20.3 percent from the peak level reached in June 2007, while the Mountain region's index is down 30.3 percent over the same period.

Initially, FHFA's December index had shown indices and annual changes extremely similar to the new January data, although following the latest revisions, FHFA now reports a larger decline in the HPI for December 2011 than was originally reported.

Although it has shown more negative growth than other indices in recent years, the decline in FHFA monthly house prices in the region generally reflects overall trends also found in other home price indices such as the CoreLogic index and the Case-Shiller index. According to FHFA, prices have largely stabilized over the past several months, but remain slightly down from 2009 and 2010 levels. Home prices are, for all practical purposes, now flat in both the CoreLogic Colorado-statewide and the FHFA regional indices. 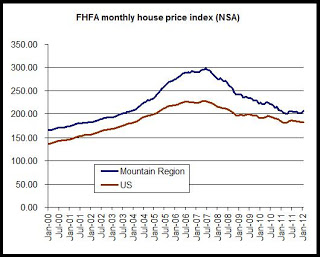 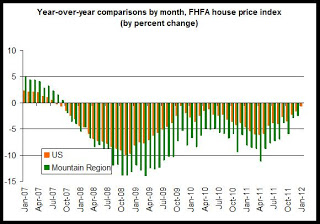 January 2012 was the 52nd month in a row during which the house price index fell year over year. We can note that until January (in the latest revisions), the Mountain region has tended to perform more poorly (from a seller's perspective) than the national index. This runs contrary to some local experience and some statistics. The Case-Shiller data for the Denver metro area, for example, shows that local prices did not decline as much as the national composite index following the financial crisis in 2008. Also, the FHFA "expanded-data" index shows Colorado performing better than the national index.

Nevertheless, the overall trend among most home price indices is one of slow downward movement that is nevertheless moving toward stability in prices. This trend includes Colorado statewide as well as the metro Denver area. This downward trend continues to diminish, however, with the rate of decline getting smaller in each month in most indices. In January's FHFA report, the rate of decline, 0.004 percent, is the lowest year over year decline reported since August 2007, suggesting an ongoing trend toward stability, if not outright growth.
Posted by Ryan McMaken at 10:13 AM