Rents up in Denver metro area, climbing fastest in Jeffco and the Boulder/Broomfield area

As can be seen in the first graph, both median and average rent have increased steadily since 2009, and both tend to track together.

(For more on the relationship between median and average rent, see here.) 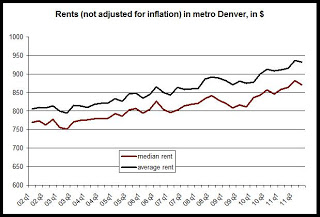 In the second graph, we see that in year-over-year comparisons, the median rent in metro Denver has increased in each quarter for the past eight quarters. The average rent has increased, year over year, during the past seven quarters. We can also note that the magnitude of the year-over-year increases since 2010 have been generally larger that the average growth from 2002 through 2009. As of the fourth quarter of 2011, the present period is poised to produce more robust rent growth than was experienced at any time during the last expansion between 2002 and 2008. 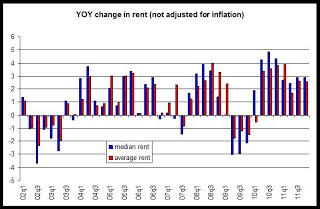 We can also note that with the exception of the first quarter of 2011, the growth in the median rent has exceeded growth in the average rent in every quarter since the 4th quarter of 2009. This suggests that rent growth is not just a phenomena among the priciest and most desirable units.

In the third graph, we see the average rents among the metro Denver counties. Douglas County and the Boulder/Broomfield area have the highest rents, while Jefferson and Arapahoe counties tend to have the lowest. 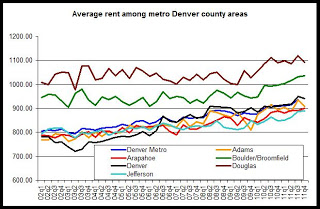 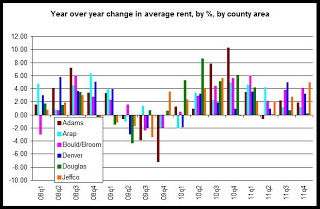