The Division of Housing today released 2011's fourth quarter report on vacancies and rents. The report includes data for 6 metropolitan areas of the state.

Strong employment has driven a strong demand for multi-family housing in the region.

The Greeley area also has reported improvements in employment, but not to the extent seen in the Ft. Collins-Loveland area. Nevertheless, the market has generally tightened in the Greeley area as well due to the close proximity of Greeley to the Ft. Collins area. Renters looking for more affordable alternatives to rental housing in the Ft. Collins area then look to housing in the Greeley area. Greeley however, was particularly hard hit by foreclosures, and the existence of a large number of single-family rental houses in the wake of foreclosures can act to cause volatility in multi-family vacancies. 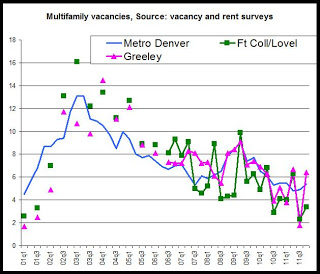 In Greeley, year-over-year rent growth during the fourth quarter of 2011, at 7 percent, was the largest rate of growth experienced since the third quarter of 2004. Among other metro areas during the fourth quarter of 2011, only the Fort Collins area reported a larger rate of year-over-year growth with an increase of 9.1 percent in rent. However, Ft. Collins, with a stronger job market than Greeley, did not experience an increase in vacancies due to increasing rent levels.

Housing markets in the Grand Junction area have behaved very differently from other metro areas in recent years. From 2005 through 2008, vacancy rates were driven down to very low rates of 1.5 to 3 percent during many quarters as a result of a boom in rental housing demand. The demand was driven by new oil and gas jobs that were being created in the region during that time. However, following the financial crisis of 2008 and the departure of many oil and gas jobs, the vacancy rate surged to over 13 percent during the fourth quarter of 2009. It has since come down and has been mirroring over state trends since late 2010.

The second graph shows that the Grand Junction rate has been above the metro Denver vacancy rate since the third quarter of 2009. Local property managers report that conditions are stabilizing in the region, and that some small rent increases are being reported in the area.

During the fourth quarter of 2011, the vacancy report shows that year over year rent growth, at 3.8 percent, was at the highest rate reported since the first quarter of 2009. 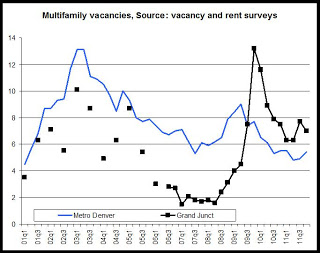 The Pueblo vacancy rate was 7.3 percent during the fourth quarter of 2011, making it the metro area with the highest vacancy rate.

At the same time, the fourth quarter vacancy rate in Colorado Springs has fallen to the lowest fourth-quarter rate reported in 12 years.

The Pueblo area's multifamily markets continue to struggle in the face of a weak job market. With a December unemployment rate of 9.8 percent, Pueblo had the highest unemployment of any metro area in Colorado, suppressing demand for multifamily housing.

The Colorado Springs area's multifamily owners have benefited from increase troop movements into the area coupled with very little new production in new multifamily housing. El Paso County reported some of the highest multifamily permitting numbers during 2011, but few of those units have yet been completed. 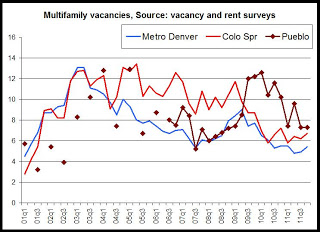 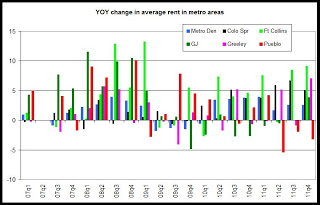 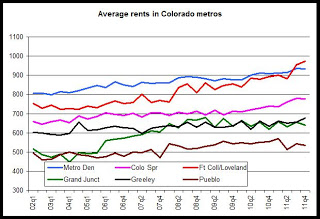