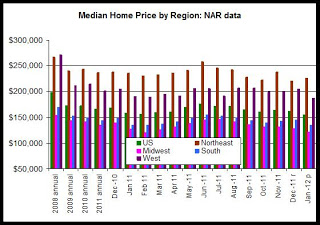 
Note: The median home price numbers were not affected by the major revision in home sales data. As explained here, home sales numbers were recently revised downward by 14 percent by the National Association of Realtors. Past estimates of home sales had proven to overstate home sales in recent years. The revision attempts to re-benchmark the data to make it more accurate.

According to the revised data, home sales transactions (closings) rose 1.4 percent, from January 2011 to January 2012, in the West region while nationally, sales rose 4.0 percent during the same period. All regions reported increases in sales activity. The largest increase was reported in the Northeast where sales rose 7.1 percent. the West reported the smallest increase.

Overall, January's sales activity was higher than was the case during January of last year. 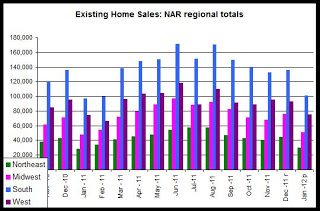 In short, home sales have increased, although without spurring increases in median home prices. Colorado data also shows some recent increases in home sales activity while median home prices have remained largely flat. This indicates that there is a significant amount of bargain hunting among new buyers. More transactions are taking place, but the buyers are not bidding up prices enough to produce year-over-year increases in median prices. We know that Colorado is slowly clearing its foreclosure inventory, and new post-foreclosure sales may be providing new sales activity, although such sales are not likely to drive up prices.
Posted by Ryan McMaken at 9:59 AM