Home value declines in the United States accelerated in the fourth quarter. According to Zillow Real Estate Market Reports, released today, home values will continue to decline in 2012, but to a smaller extent than was seen during 2011.

In Colorado's metro areas, all areas except the Fort Collins metro area showed year-over-declines from December 2010 to December 2011. Grand Junction and Pueblo showed the largest drops while Boulder and Colorado Springs showed the smallest drops. 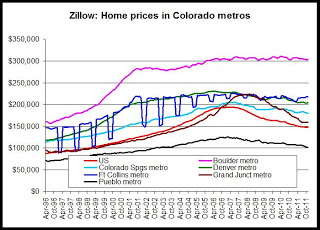 Zillow home valuations, known as the median "Zestimate valuation" should be taken with a grain of salt, but in this case they do appear to be in line with other home price indices and trends. The metro trends presented here match up well with the metro trends provided by FHFA's quarterly reports on home prices in Colorado.
Posted by Ryan McMaken at 9:20 AM