Year-to-date through December of 2011, 84 percent of new multifamily permits issued have been issued in Larimer, Jefferson, Denver and El Paso counties.

No other county in the state reported any new multifamily permits.

In the map below, we see that the geographic distribution of new multifamily permits. 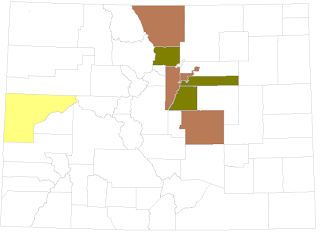 With so little demand for new condominiums right now, it is safe to assume that the lopsided majority of new multifamily permits being issued are for rental housing. We see most of this activity in areas where vacancy rates have been tight or look to be tight for the near to mid-term.

With apartment vacancy rates headed to five percent in the Denver, Larimer and El Paso counties, the markets appear to be responding to tight vacancies with plans for future construction.

Year-over-year change:
The following show the year-over-year percent changes in new multifamily permits from January-December 2010 to the same period this year.

The Census Bureau has not yet released its 2011 year-end report which include more data from more counties. We will publish an analysis when that data becomes available.
Posted by Ryan McMaken at 8:40 AM