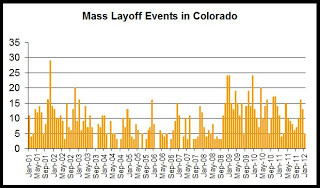 January mass layoffs have now fallen three years in a row after peaking at 24 mass layoffs during January 2009. The second graph shows January totals since 2001: 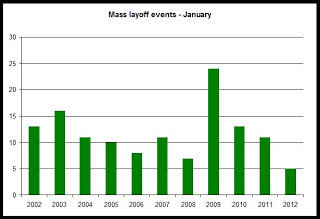 Overall, the most recent mass layoffs data suggests that the employment situation continues to stabilize. New layoffs continue to lessen, and as we've seen in the most recent employment data, January job growth was at a five year high in Colorado. 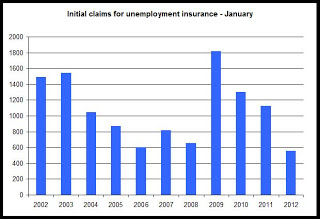 The Mass Layoff Statistics (MLS) program collects reports on mass layoff actions that result in workers being separated from their jobs. Monthly mass layoff numbers are from establishments which have at least 50 initial claims for unemployment insurance (UI) filed against them during a 5-week period. Extended mass layoff numbers (issued quarterly) are from a subset of such establishments—where private sector nonfarm employers indicate that 50 or more workers were separated from their jobs for at least 31 days.
Posted by Ryan McMaken at 3:11 PM