The latest data is based not on the decennial census, but on quarterly estimates made using data from the Current Population Survey. Quarterly data at the state and metro level, using current methods, are only available since 2005. Extrapolating from several different homeownership measures, it looks like homeownership peaked near 72 percent in Colorado in 2003 and has been slowly declining since. 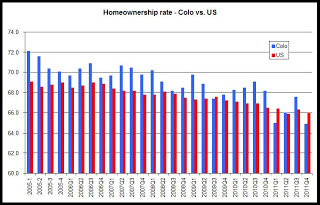 The more likely option would be that new household formation has been robust in Colorado while new home purchase activity has not been robust. The addition of a large number of new renter households at the same time that home purchases decline could lead to a fairly swift decline in the homeownership rate. We do know that household formation has continued at surprisingly high levels in spite of weak job growth with more than 20,000 new household per year in recent years. At the same time, we know that home purchase activity continues to decline as a rate of 1 to 3 percent year over year. We also know that population growth through in-migration added another 30,000 people to the state during 2010.

In short, foreclosure activity has been falling in the state, but new household formation and in-migration has added a significant number of new persons and households. This will push down the homeownership rate if home purchase activity declines. 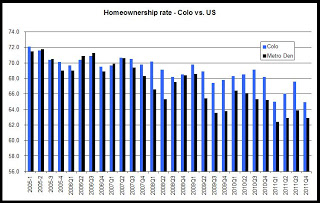