The number of new hires in the U.S. West, which includes Colorado, rose 7.19 percent year over year from December 2010 to December 2011, as layoffs decreased 2.6 percent during the same period.

According to the latest Job Openings and Labor Turnover report, released Tuesday by the U.S. Bureau of Labor Statistics, the West reported more growt hin new hires than the U.S. overall. The number of new hires in the U.S. rose 2.7 percent from December 2010 to December 2011. During the same period, layoffs fell 0.4 percent for the U.S.

The first graph shows the year-over-year change in new hires and in layoffs in the U.S. West region. The overall trend is toward a gradual reversal of the large increases in layoffs and big declines in new hires that were seen during 2009. 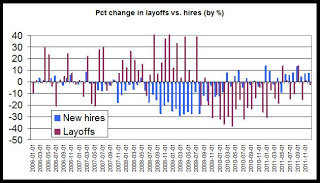 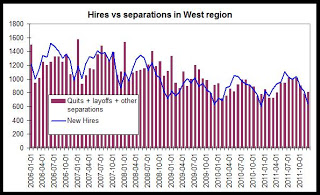