Nationwide, the rental vacancy rate was 9.4 percent during the fourth quarter.

In both the Denver-Aurora area and statewide, vacancy rates have fallen steadily since 2009. 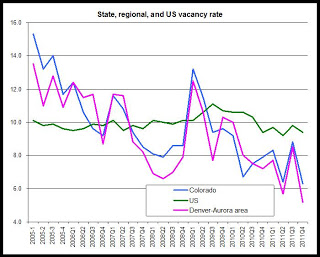 As Colorado's vacancy rate moved further below the national rate, the most recent data further suggests that rental housing in Colorado and the Denver area is experiencing greater demand than is the case nationwide. This is likely due to strong population growth and household formation in Colorado relative to many states and metro areas.

These vacancy rates are part of the Census Bureau's Housing Vacancy Survey (HVS). The method for data collection varies significantly form the method used for the collection of the Division of Housing's vacancy and rent surveys.

The Division of Housing's report is based on quarterly surveys that measure the vacancy of all surveyed units in specific dates for each quarter. Units are either vacant on the day in question, or they are not. By contrast, vacancies in the HVS are measured according to occupancy of a unit over a much broader time period, and are subject to some interpretation on the part of the person conducting the survey.

Overall, however, the two surveys for Colorado and the metro Denver area show the same general trends over the past seven years.
Posted by Ryan McMaken at 2:15 PM