However, when permit totals are adjusted to the number of existing housing units in each county, the counties with the larges amounts of permit activity were Douglas, Weld and Chaffee counties. 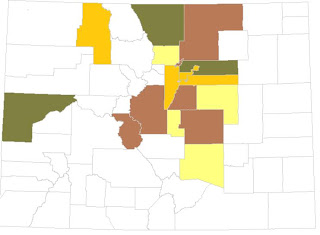 During January 2012, the areas with relatively few new single-family permits relative to the size of the existing stock are Pueblo, Jefferson, Arapahoe and Boulder counties.

It is also helpful to see which counties have shown the largest increases and decreases in permit activity. In the map below, we see that comparing January 2011 to Janaury 2012, Adams, Boulder and Douglas counties, with increases of 100 percent or more, were the counties with the largest increases in single-family permit activity. Chaffee, Denver, El Paso, Jefferson and Weld Counties all reported year over year increases of more than 40 percent. 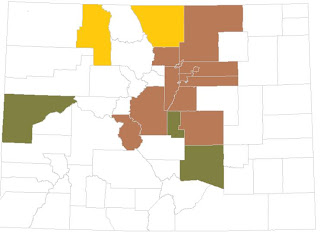 *I have included Broomfield County in the "brown" category, due to its increasefrom 0 to 14 permits, year over year. Technically, a rate of increase cannot be calculated mathematicall from a starting point of zero.
**I also included Teller county in the "green" category for its increase from 0 to 1.
*** The number of permits in Routt County was unchanged at 2, year over year.