Case-Shiller released its home price index for December today. The home price index for the Denver area fell 0.9 percent from November to December, and fell 0.4 percent,year over year, from December 2010 to December 2011. Prices fell in December due at least partially to seasonal factors, although the overall index for the year remains below the index values seen during 2010. The first graph shows the index values since 2001: 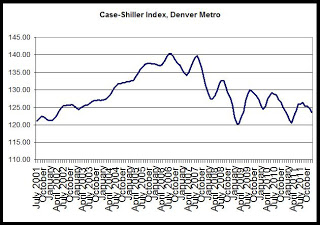 According to S&P's press release, home prices are still facing headwinds and have "not yet stabilized":

“After a prior three years of accelerated decline, the past two years has been a story of a housing market that is bottoming out but has not yet stabilized. Up until today’s report we had believed the crisis lows for the composites were behind us, with the 10-City Composite originally hitting a low in April 2009 and the 20-City Composite in March 2011. Now it looks like neither was the case, as both hit new record lows in December 2011. The National Composite fell by 3.8% in the fourth quarter alone, and is down 33.8% from its 2nd quarter 2006 peak. It also recorded a new record low.

In year-over-year comparisons for December, Atlanta showed the largest drop, with a decline of 12.8 percent, while the index in Las Vegas fell 8.8 percent. Year over year, home price indices fell in 19 of the 20 cities included in the study. Only Detroit showed increases. 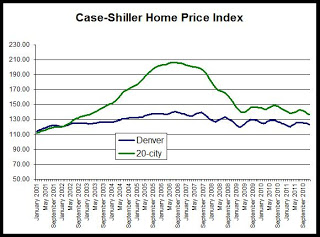 Nevertheless, the Denver index during December was at the lowest December value seen since 2001. 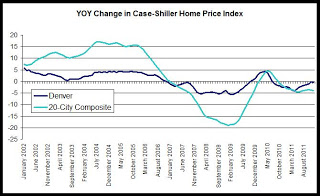 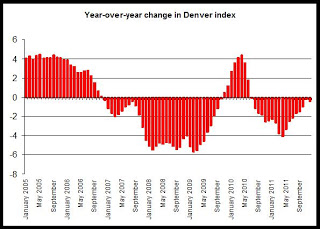