The second chart, which shows the vacancy rate itself for each quarter, shows that the vacancy rate for the Colorado Springs metro area remains near the ten-year low of 5.8 percent, reached earlier this year, and is well below what has been typical for the vacancy rate over the past ten years.

At 6.7 percent, the fourth quarter's vacancy rate is the lowest fourth-quarter rate since 2000, making it a 12-year low for the 4th quarter. 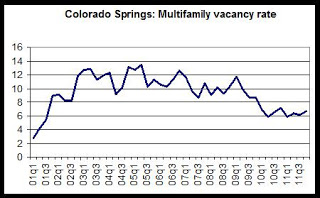 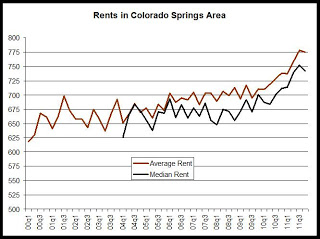 The region-wide average rent in Colorado Springs has increased for the past eight quarters when compared to the same quarter the previous year. It increased 5.0 percent from the fourth quarter of 2010 to the fourth quarter of this year. As can be seen in the last graph, the past six quarters have shown growth rates near or above 4 percent which is somewhat similar to the sort of growth in average rents seen in Colorado Springs before the 2002 recession hit Colorado. At 6.7 percent, the year-over-year change in the average rent for the second quarter of 2011 was the largest change reported in more than ten years. With six quarters in a row of rent growth at or near 4 percent, and with eight quarters of growth overall, the rent trend over the past two years is one of the most solid growth trends seen in the region in more than a decade.

This rate of increase has exceeded the regional CPI, which has tended to be near 3 percent in recent years and illustrates that rent growth in the region is notable, even when adjusted for inflation. 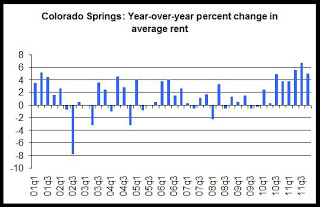 While the recent growth in rents and the declines in vacancy rates does not in itself prove continued demand for multifamily rentals in the region, the market will likely continue to tighten as new multifamily stock is only slowly added to the marketplace. The absence of any substantial amount of new construction of rentals in the area will contribute to ongoing rent growth and tightness in vacancies. Barring a large mobilization of troops out of the area, there will be sufficient population to sustain continued demand for rentals.

The vacancy and rent report also contains information on median rents. For more information on the differences between median and average rents, see here.
Posted by Ryan McMaken at 1:49 PM