When adjusted for inflation, however, average rents in several metro areas of the state have decreased over the past decade.

The first chart shows, as an example, the divergence between the average rent, in nominal dollars and in inflation-adjusted dollars, in the Denver metro area over the past decade.

The graph shows us that if the value of the dollar were constant (and all other things being equal), a renter would only need 731 dollars in 2010 to rent an apartment that he or she could have rented in 2000 for 746 dollars.

In the second graph, we see the metro areas in the state that have experienced losses in the inflation-adjusted average rent over the past decade. Metro Denver, the Greeley area and the Colorado Springs area had a lower average rent during the third quarter of 2010 than during the first quarter of 2000. In nominal terms, all of these areas have higher average rents now than was the case a decade ago, but inflation brings the change over the past decade, in real dollars, into negative territory. 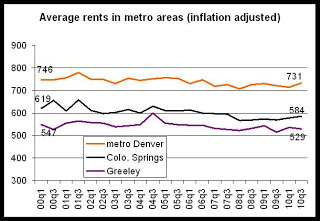 The third graph shows the metro areas that have experienced increases in the average rents even after adjusting for inflation. These areas include the Fort Collins-Loveland area, the Grand Junction Area and the Pueblo area.

The increase in the Fort Collins-Loveland area further reinforces recent conclusions that Larimer County enjoys one of the strongest apartment markets in the state. 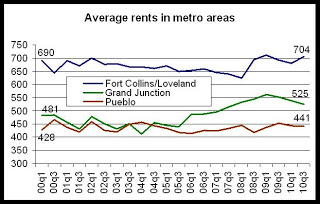 These figures are notable since they provide some additional insight into the profitability of rental housing at the present time. While the multifamily industry expects significant increases in rents over the next several years, many property owners are still in the position to making up for several years of falling rents in inflation-adjusted terms.

This phenomenon in inflation-adjusted rents is also worth noting because it helps to explain why so little new construction in multifamily rental housing has taken place in recent years: average rents have been falling in inflation-adjusted terms in many areas, thus providing a disincentive for new development.